You may have heard a lot about containerd recently, but did you know you've probably been using it for over a year?

This series will take a deep dive into what's new with containerd, its origins, any why you should care.

containerd began its life as a component of Docker 1.11 when it replaced Docker Engine's built-in container execution model as an external component. With containerd, Docker Engine gained support for the early draft OCI specs which means it became relatively trivial to add support for new execution environments without having to change the main Docker codebase. containerd was built to execute containers efficiently with whatever OCI compatible runtime the user wanted to use. The introduction of containerd also came with being able to delete a large swath of complicated, platform dependent code from dockerd.

So this thing has been around for awhile, why should you care? With the Docker Engine moving further up the stack with things like multi-host networking, service discovery, and swarm-mode orchestration it became clear that both within Docker and in the greater community that there was a need for something more than what containerd offered and yet much less than what Docker engine provides, and with fewer opinions. There is a lot more effort in managing containers than just the execution of them, including distribution, storage, networking, and other tasks. After much time was spent thinking and discussing with the community what was really needed, the containerd 1.0 project was kicked off.

So what is containerd 1.0 all about? In short, it's a new container runtime built with no baggage, four years worth of hindsight, and a well defined scope. It's designed to be wrapped, easily integrated with, and customizable meanwhile providing the right functionality so that consumers of containerd don't have to re-implement a lot of the same functionality. It provides a base set of (GRPC) services backed by implementations which are fully pluggable, either via compiled in plugins or using go 1.8's dynamic plugin model (nothing to do with Docker style plugins). None of the containerd services are strongly coupled, so you can choose to use one piece and not another, and combine them in whatever way that your integration demands.

One thing you might ask is why "1.0"? The most recent release of containerd, and the one that's currently shipping with Docker (as of Docker CE 17.09), is from the v0.2.x tree of containerd. It's not "v0.2" because the software itself is unstable, but because the API's are not stabilized, and even the spec it depends on (OCI runtime spec) was only recently brought to 1.0. Docker deals with any API breakages in containerd internally and the user is not concerned with it.

Along with the "1.0" version, the containerd project is also defining a sensible support timeline for releases. Docker has also donated containerd to the CNCF.

So what do these services look like? Here's a high-level view, we'll go deeper into each service in subsequent posts in this series.
note: much of this can be found in the design doc

The content service is a content addressable storage system. When the client pulls an image, the image gets stored into the content store. Docker also has a content-addressable store, but Docker does not expose it to clients and is only used for images.

All immutable content gets stored in the content store. This doesn't have to be container images, and in fact the store doesn't care what the type is.

The snapshot service manages filesystem snapshots for container images. This is similar (in concept only) to the graphdriver in Docker (e.g. overlay, btrfs, devicemapper, etc). One big difference is the client interacts directly with snapshot service whereas in Docker clients only interact with the image itself and has no control in where or how an image is unpacked.

Another major, and quite novel I think, difference with Docker's graphdrivers is a snapshot driver does not manage the actual mounts but rather returns a list of mounts that the client needs to perform in order to operate. You'll find that the inputs of other services dealing with the filesystem is a list of mounts rather than a path on disk that is already expected to be mounted.

The overall design of snapshots is very different from Docker, I encourage you to check it out if you are interested in this sort of thing.

The diff service generates and applies diffs between filesystem mounts.

The task service allows a client to manage a container's runtime state. When you create a container you are creating metadata, when you create a task you are allocating runtime resources. Tasks can be started and stopped, paused and resumed, etc. If you want container metrics, this is where you get them.

The events service is a pub/sub service used by clients and other services in order notify of specific things occuring within a service. A client can use events to find out things like when a container was started and stopped among other things.

The introspection service provides details about the running containerd instance. A client can, for example, use this to find out about loaded plugins, their capabilities, etc.

containerd 1.0 makes use of a rich-client model where containerd itself doesn't impose many opinions but rather the functionality for the client to make its own opinion. This comes at a trade-off of putting more work on client builders to implement their own features.

Just as an example of what "rich-client" means, here is an example of how an image would get created in containerd from a registry. Take note that the pull operation (and push for that matter) is all client side and uses containerd services to store the content and unpack onto a filesystem. 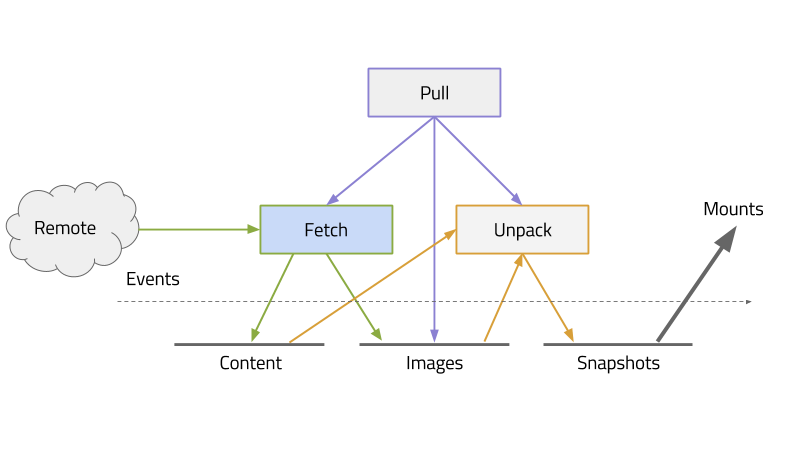 While containerd does use GRPC as an API, and thus anyone can generate their own client, it also provides an unopinionated, rich Go client implementation which does not require dealing with the GRPC layer itself.

Here is a code-snippet using the provided go client to run a redis container:

note: This example is intentionally using mostly defaults and letting the client make a lot of choices for us, in a follow-up we'll go through just how much you can do.

Work is on-going to move Docker to containerd 1.0, likely with a slow move to have Docker use more and more of containerd's services. You can also try out containerd with Kubernetes with cri-containerd. If you've tried out linuxkit you've already used the new containerd!

Note: containerd 1.0 is currently in the beta stage, check out the releases page to track its progress.

There's much more detail to go into here, so look forward to more posts about containerd.